While the fitness industry is known for some very good information, there is also a widespread wealth of misinformation. It’s easy to get led in the wrong direction when you have so much content coming from all different sources. The following are just a few of the most common fitness myths that most people have come across at one point or another. Some you’ve heard of and maybe some you haven’t but either way, I want you to read this and feel more educated than before and not be afraid of lifting some weight or eating some carbs. 😉

Myth #1: Eating 6 small meals per day is the only way to keep your metabolism up.  Not doing so will cause you to go into “starvation mode” which will only make you hold onto more fat when you do eat.

Truth: Contrary to popular belief, the time in which you eat or the amount you eat in each meal does not matter. Eating 6 small meals or 3 big meals per day has no effect on how fast your metabolism is.  This is called the Thermal Effect of Food (TEF).  If you eat 2,000 calories a day, your body is going to burn those calories at the same exact rate no matter how or when you consume them.

Myth #2: If you’re a woman, stay away from weights because they will make you bulky and you will look like a man.

Truth: I’m not exactly sure where this myth came from (probably from pictures of female pro bodybuilders who use steroids) but it couldn’t be further from the truth.  Simply put, women just don’t have the same amount of hormones as men that will cause muscle to grow larger.  Testosterone, a major sex hormone produced in the gonads in men is responsible for muscle growth (among other anabolic hormones).  These hormones are found in much higher concentrations allowing men to build muscle at a faster rate.  Because of this, women are not able to put on muscle like men.  So ladies, get out there and lift some weights!

Myth #3: Tons of crunches and ab exercises are the way to get a six-pack or a flat belly.

Truth: “The best exercise to get a six-pack is to stop eating so much crap.”  The reason you don’t have visible abs isn’t due to your lack of sit-ups, but rather due to your diet.  In order to see your abs, you must first lose the subcutaneous fat layer covering them up. The only way to lose that? Yup, you guessed it… a better diet!  Once you shed that layer of fat, you can make use of abdominal exercises to build the muscle and bring them out! It’s important to know that everyone will hold and burn fat differently than others so the only way to ensure you burn the fat you want is to consistently move a little bit more and eat a little bit less.

Myth #4: If you don’t sweat in the gym, you aren’t working hard enough.

Truth: So, if you sweat while sitting on the beach tanning, are you also working hard?  Sweating is simply your body’s way of cooling itself off and typically occurs when your core temperature begins to rise.  This can be through a high ambient temperature (aka under the sun or in a sauna) or through cellular metabolism and respiration (aka physical activity).  Everyone will sweat at different rates so just because you are (or aren’t sweating) doesn’t necessarily mean you are (or aren’t) working hard.  Just be sure that you FEEL like you are working hard when you are there!

Myth #5: If you aren’t sore the next day, you didn’t work hard enough.

Truth: Have you ever been on a long hike and been sore the next day? If you are sore, chances are it is from the fact that you did something that your body is not used to.  If you went on hikes every day, I’d be willing to bet you wouldn’t be sore after a few days.  This is due to your body adapting to the work load and performing the tasks more efficiently.  It doesn’t mean you aren’t working hard, it just means your body is getting better at it!  Now in order to keep progressing, it is important to not get comfortable with the workload and to continually raise the intensity!

Myth #6: Staying away from certain foods will help you lose weight faster.

Truth: The only tried and true way to lose weight is to be in a caloric deficit. Any diet, whether it be the atkins, paleo, gluten-free, intermittent fasting, or any other diet is based around eating less calories than you are burning. When you eat less than you burn off (a caloric deficit), your body will eventually lose weight. Conversely, if you are eating more than you burn off (a caloric surplus), your body will eventually gain weight. The size of your deficit, not the foods you eat (or don’t eat) will determine how much weight you lose.

Truth: This goes hand-in-hand with the myth above. The only way you are going to lose fat is to consistently be in a caloric deficit. The areas and rate at which you lose the fat will vary from person to person. Some will lose the fat off of their legs first, some from their face, or some from their abdomen. You cannot control where your body pulls fat from. All you can do is consistently move a little bit more and eat a little bit less.

Is there anything else you’ve heard that you’re curious about? Feel free to leave me a comment below and I’d love to help you and steer you in the right direction. Or email me at yami@yamimufd.com if you’re interested in one-on-one personal coaching!

Prev
3 Reasons Why You SHOULD Work Out on Your Period 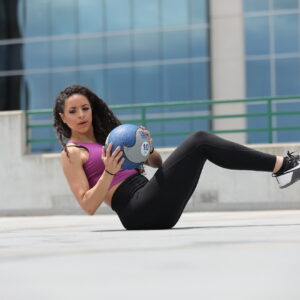 3 tips for Starting (& keeping) your Fitness Routine
Next

happy due date baby girl! we’re ready when you a

This ‘in between’ time is just so… in betwee

wouldn’t want to be doing this with anyone but y

Nursery Tour is Live! ✨ The star of the room is

While I know that it’s a personal choice, I thin